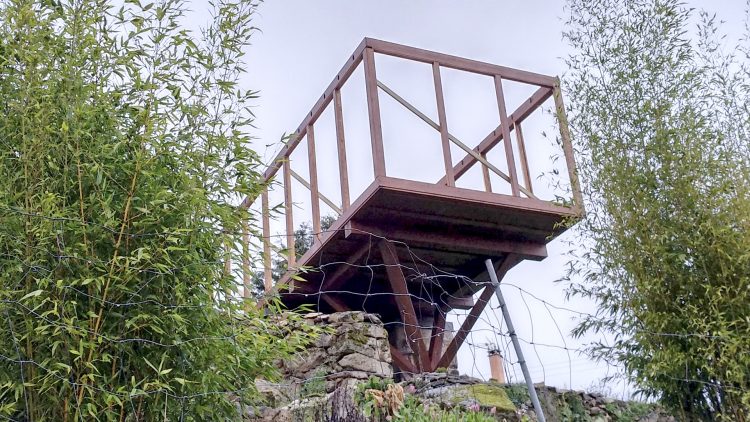 placing the panels of the floor The panels and pillars are placed on the platform in order to make the mounting easier and faster. The panels lean on between and over the beams. We´ve got the exact space so that everything fits in with the minimum slack between the pieces. Once all the elements are placed they will be screwed one on another to give rigidity and resistance to the set.  As different pieces of the construction are united by screwing the set becomes more and more resistant and finally it is an undeformable unit. the pillars are fitted in the beams of the floor

The horizontal platform is ready. Now it´s time to fit the pillars in the beams of the floor, which can be done incredibly fast and easily. We need to keep assembling the basic structure of the house. We start fitting the beams of the house cover in the pillars. Everything has been studied so that the beams directly fit in the pillars and the beams in one another, only by fitting in and screwing. We have to mount another platform, but this time it´ll be inclined because the roof of the house is inclined too. The beams are being fitted in in order to ensemble  the joists of the roof.  As you can see in the southern side of the roof, the beams have got some wood emptying that will be used to put a large cantilever to protect the house from strong sunning that Orense is exposed to in summer time. Ubuild can give special and personal solutions to any house wherever it is ensembled. Now it´s possible to observe the volume of the new house from the principal village road. The beams and the pillars have been ensembled.  Everything is ready for fitting in them the rest of the constructive elements that will form the house. We´ll keep on explaining all the process of mounting this house. To be continued…