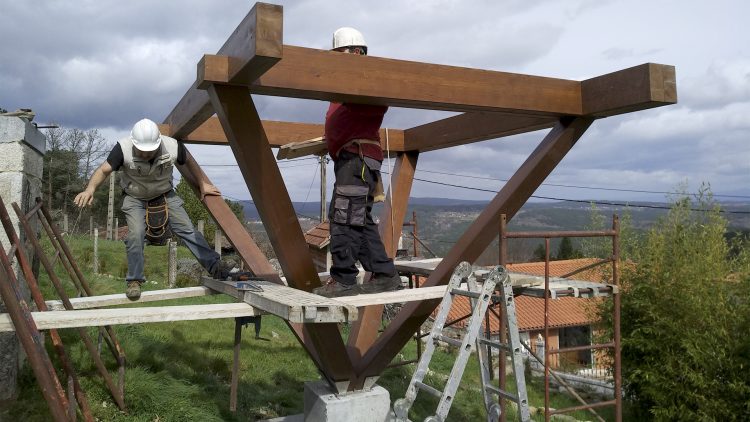 We can observe in the picture below the structure in the workshop, where we have checked that all the pieces fit in perfectly. It is easier to do it here because the superfice is plane and it can be done in an inverted way. In the building site it´ll be a bit more difficult, but it must be assembled with the same precisión as in the workshop. The big metallic piece is a great help in the beginning of the assembly. The piece is stainless Steel and it is placed in the concrete foundation, which supports four pillars. They fit in perfectly in the base and this marks the slope that these pillars must have in order to assemble the horizontal support structure of the house. Once these four support pillars are assembled we continue with the horizontal beams which lean on these pillars. All these pieces fit in inhibiting their shifting. The bigger the weight over them, the more secure is the unión and the more difficult is their shifting. Starting with the assembly of the floor structure of the house

The stone wall is the main support of the house. In the área where the slope of the terrain increases a lot we have decided not to continue with the wall, in order not to give too much presence for the volumen of the ensemble. A integration is sought in the core of the village. We think that if the final part of the house is in the air, the view of the house is lighter. And using viroc as the final material of the ventilated facade will help the house to integrate better with the existing stone houses of the place, becoming almost unnoticed. In the image below we can see the assembling of the beam that support the air part of the house. One part leans on the stone wall and another on the wooden structure. Some metallic supports are screwed in the beams of the floor. The height of these supports can be regulated in order to guarantee the horizontality of the plane of the floor. At the same time these supports will be welded in metallic plates fastened in the concrete base. These plates anchor the house in the ground. The metallic base guarantees that the wood never is in contact with land and there is always an air chamber between wood and ground. This is essential for a good preservation of the wood for future. Section by section the beams are assembled in the floor. At the same time  the joists are placed in the recesses that the beams have reserved for them. All the unions, both  beams with beams and  joists with beams, are screwed. The  estructure that sustains the floor of the house is now ready. The following day we´ll sart assembling the panels and the isolation of the floor to be able to work comfortably and to continue assembling the house. Up to now everything has gone as planned. We´ll keep showing all the process of assembling the house. To be continued…