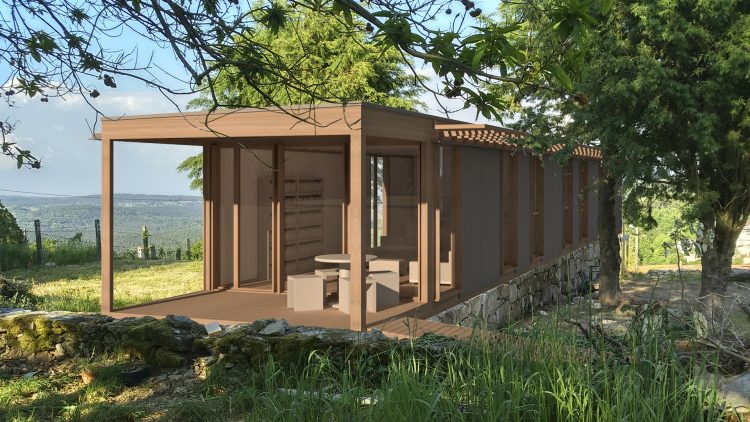 The vegetable layer is removed in order to reach the rock of the land. The house will be placed touching the reference stone wall, and the level of the floor in the porch will be the same  as the upper surface of the reference stone wall. The level of the house will be some centimeters higher than the land, and because of this the house will be acceded by a small ramp. One of the reasons for this is to win the maximum height for the clean view from the principal bedroom. There is another very important reason which will be explained in the next part. the land is being prepared

After forming perimeter foundations, you can see how the base of the land is prepared for the support in the edges of the stone walls. We also prepare the surface for all necessary elements so that the house participates in the ecological cycle of the land. As we explained before, the are several stones belonging to the old house that was in the land. These stones will be used to build the support walls of the house. The view of the house with its surroundings is enhanced, we have already seen that there are other stone walls made of the  same sort of stone and these have been prepared to access on foot through them. In the background you can see the magnificient chestnut tree which will attract attention from the living room. In this photo the stone walls have been finished, now it is necessary to conclude the upper part by a concrete hoop and metal plates. The house will be directly set over them. The stone walls settle between the trees and we can see so natural, open and spectacular views, which can be enjoyed in few weeks from the principal bedroom. this is how we imagine it

This photographic montage is the approximation of how the house will be settled over the stone walls and between the trees so that you can enjoy nature and the large valley. From the porch and from the window of the living room we will have first the view of the chestnut tree. The longitudinal facade it is orientated to the south and so it baths in the sun from morning up to late afternoon. From the windows of the kitchen and the bedrooms you can see a new element among the trees giving joy to the land. This new element will be part of the daily funtioning of the house. We will talk about it later. In the next part we will show how the first parts of the structure of the house are produced in the factory using wood machining center. To be continued…